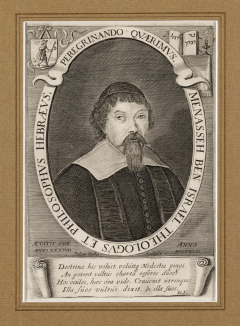 Rabbi Menasseh ben Israel, also known as Manoel Dias Soeiro, was born in 1604 on the island of Madeira. The family had left Portugal a year before the birth of Menasseh, fleeing the Inquisition. The family came to Amsterdam in 1610.

Menasseh ben Israel headed the community’s Yesiba and wrote a number of tractates, of which Nishmat Hayim, about reincarnation of the soul, is the most well known. Together with Hakham Jacob Sasportas, he convinced Oliver Cromwell to lift the ban on Jewish immigration to England.

Menasseh founded the first Hebrew printing press in Amsterdam, Emet Meres Tisma’a, making him one the first people to print books in Hebrew in the Netherlands. Menasseh was in close touch with several members of Amsterdam’s cultural elite and counted people such as Vossius, Barlaeus and Hugo de Groot among his friends.

Menasseh passed away in 1657 in Middelburg and is buried in Ouderkerk aan de Amstel. 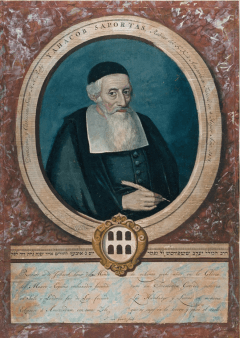 Hakham Jacob Sasportas was born in 1610 in Oran (in present-day Algeria). He first arrived in Amsterdam in 1646, after escaping the prison of the Moorish ruler. He had already served as rabbi in Tlemçen, Fez and Sali. His stay in Amsterdam was brief. The Moroccan King sent Sasportas on a diplomatic mission and in 1664 he was installed as rabbi of the Portuguese community in London. Together with rabbi Menasseh ben Israel, he paid a successful visit to Oliver Cromwell and requested to lift the ban on Jewish immigration to England.

In 1673 Hakham Sasportas returned to Amsterdam. He first led the Keter Tora Yesiba, set up by the well-know De Pinto brothers. In 1680 he became head of Ets Haim. After rabbi Isaac Aboab da Fonseca passed away in 1693, he was installed as Hakham of the Amsterdam community, a position he retained until his death in 1698.

Hakham Sasportas was one of the fiercest opponents of Shabtai Tzvi, the false Messiah. He wrote numerous letters to Jewish communities around the word, imploring them to unmask the impostor. 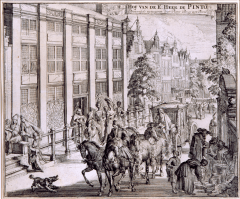 The De Pinto brothers, Isaac, Aron en Jacob, were born in the 18th century into one of the wealthiest, Portuguese-Jewish merchant and banker families. Their father, David de Pinto, was among the ten wealthiest Portuguese in Amsterdam. The family owned a manor house on the banks of the river Amstel, Tulpenburg, and another one on the Sint Antoniesbreestraat, referred to as the De Pinto House, or the Court De Pinto.

Only Aron de Pinto attended Ets Haim. All three brothers, however, were prominent leaders of the Portuguese Jewish community. Until 1760, they alternated on the board of the community.

The De Pinto family was on friendly terms with Willem IV, stadhouder of the Netherlands and helped finance his war against France, which only increased their political influence.

Isaac de Pinto became a well-known philosopher of the Enlightenment period and exchanged letters with Denis Diderot and engaged in polemics with Voltaire, for instance in Apologie pour la Nation Juive. He wrote his apology in 1762 when all the poor Jews had to leave the city of Bordeaux. 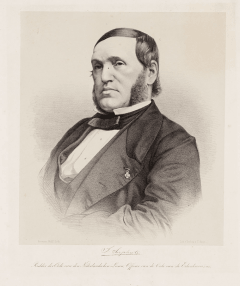 Sarphati was born into a family of tobacco traders on the corner of Weesperstraat and Nieuwe Keizersgracht. He went to medical school in Leiden. He earned a Ph.D in 1839 and established himself as a general practitioner in Amsterdam.

That is when he became aware of the havoc poverty, malnourishment and poor hygiene was creating among the proletariat. He developed a number of large-scale projects that have contributed greatly to public health and the development of the city of Amsterdam. Sarphati developed a schedule to collect garbage (which later developed into the city’s sanitation department). He started the first bread factory along the Vijzelgracht that produced 9,000 cheap loaves of bread every week.

He drafted a plan to expand the city from Frederiksplein outward. Only his proposal to build the Paleis van Volksvlijt (Palace of the People, built for large exhibitions), and the Amstel Hotel have been realized.